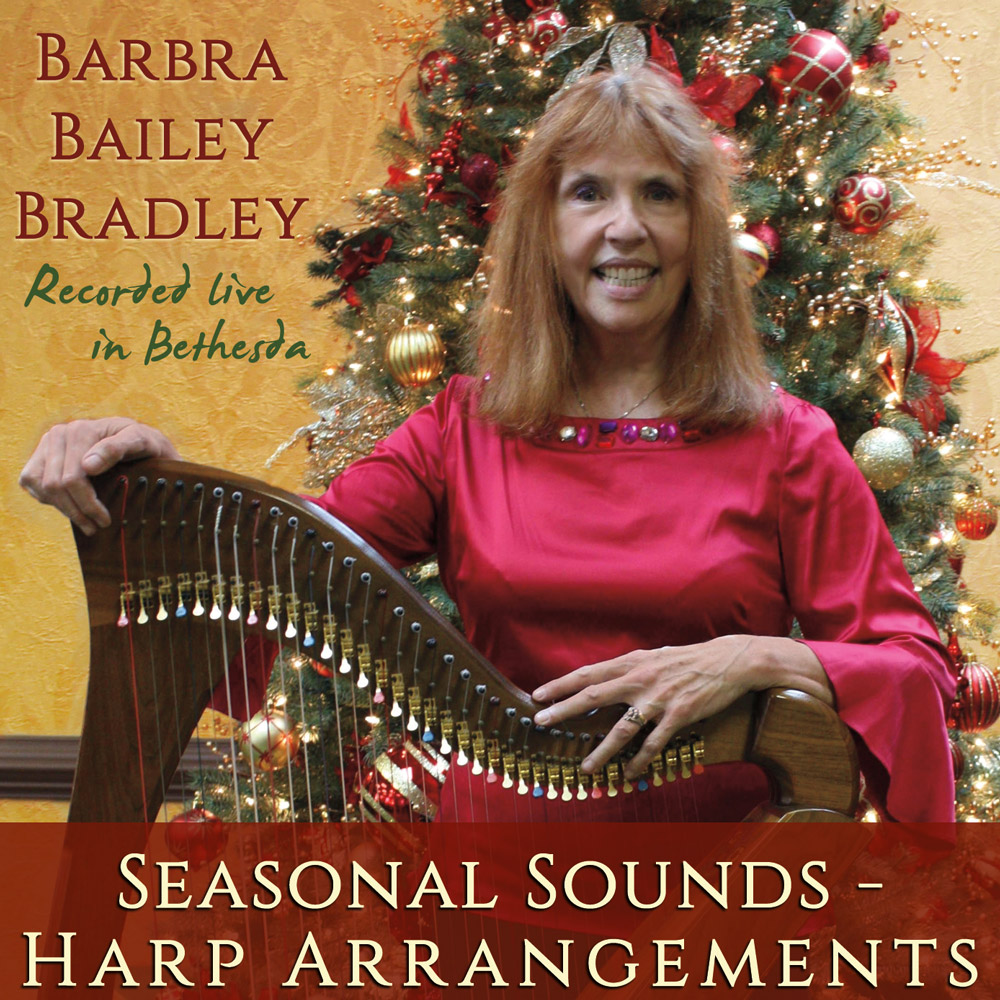 Early in 2015 I decided that it would be fun to make a recording of music from what is now called the holiday season. I already had some finished arrangements that had been performed many times, but wanted to do more. This CD is a result. I have tried to being new visions to old favourites. It was recorded live in Bethesda on a Heartland 36 String Sylvan lever harp.

Prayer of Thanksgiving is a Dutch melody coming from a 1626 collection of Dutch patriotic songs, and celebrates a victory in 1597. We sing it in churches at the Thanksgiving season in the United States, and I have always liked it.

O Come, O come, Emmanuel takes me back to my childhood, when the hymn was sung at the beginning of the Advent season. I always felt cheated because I wanted to continue singing it throughout Christmastime.

Deck the Halls is a rollicking secular carol that I remember from a tiny book of carols that sat on our piano.

Greensleeves [What Child is This] is such a beautiful tune, possibly written by Henry VIII of England. Christmas words were added to the mix long ago, so it is enjoyed twice as much during the holiday season.

Go, Tell It on the Mountain is a spiritual. Some years ago I set it as a harp trio at school. This year I decided to arrange the trio into a solo version for the CD.

Huron Carol is another memory from my Canadian childhood. I loved the idea of the Jesuit priests teaching the Christmas story to the First Nations near Lake Huron by using images to which they could relate. I wanted to make it a little mysterious to express this.

Good King Wenceslas “Tempus adest Floridum” is actually a tune for a springtime carol, but it works beautifully to describe the good works of King Wenceslas.

Fantasy on “We Three Kings” is another rather exotic arrangement, as I remember Christmas pageants of childhood involving the three wise men who came from the east with gifts. Where did they originate?

Jingle Bells is known by most everyone in the United States because it is sung and played throughout the holiday season. I wanted to include it because it is a fun tune.

I Saw Three Ships is traditional carol that speaks of sailing. [NOTE – I think there should have been an “a” before traditional; too late for the book – I missed it – but could be fixed for website. . .] I worked at getting that feeling into my arrangement.

Silent Night has a wonderful history from its beginning on a Christmas Eve long ago to its being sung in many situations throughout history. I always like to end a holiday performance with a version of it, and now I have one of my own to share. :):)