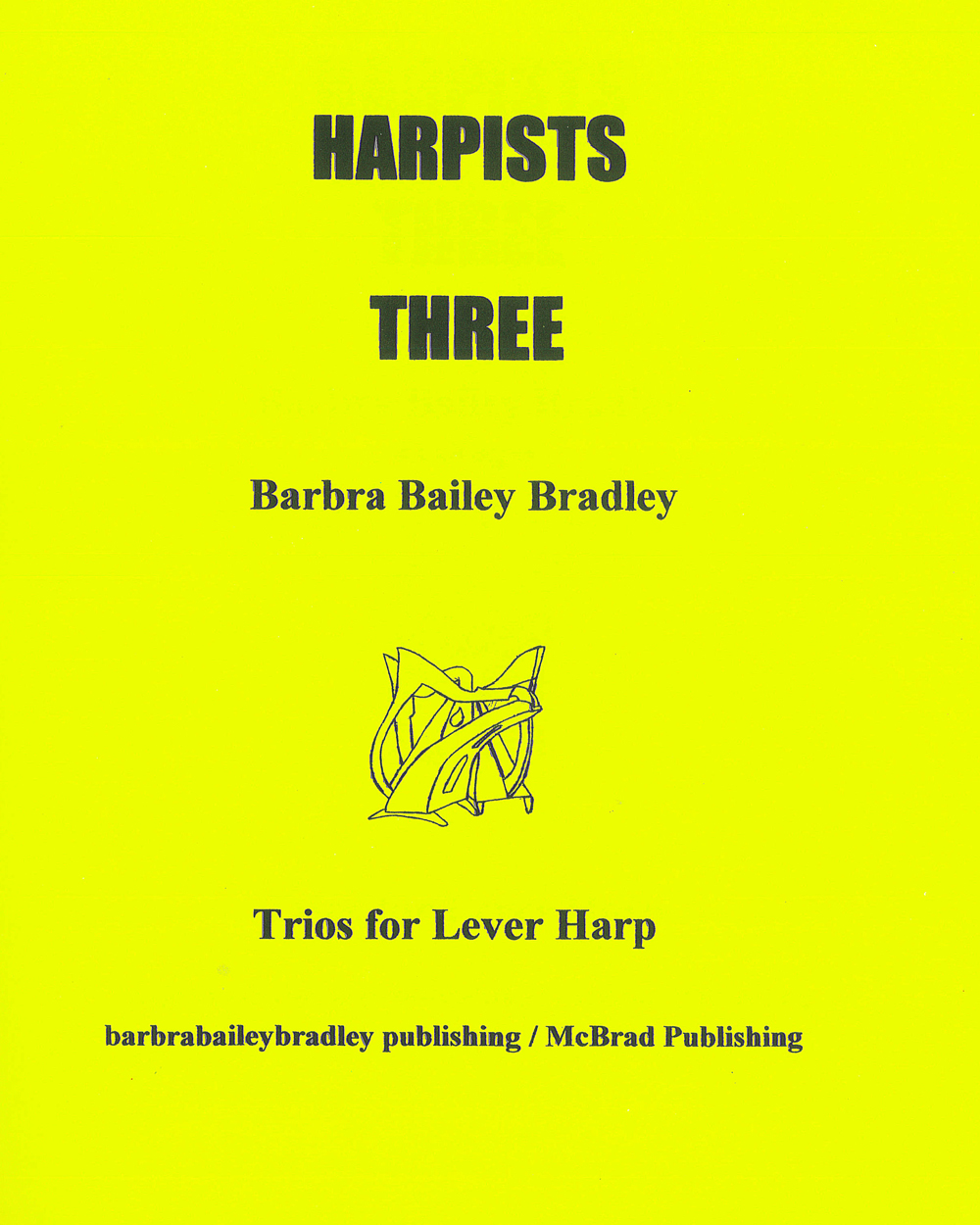 A Description of Harpists Three, Trios for Lever Harp

Barbra’s book – Harpists Three – was published in 2008, and is a collection of six trios for harp trio or harp ensemble. Although listed as a book for lever harp, the trios can also be performed on pedal harp.

Each trio has parts of varying difficulty, so that harpists of all levels of expertise will feel comfortable playing in an ensemble.

Harpists Three includes Greensleeves, Simple Gifts, O Shenandoah, Swing Low / Steal Away Medley, A Medley of Carols , and A Medley for Sue. Each trio has both score and parts included, and the trios are presented in gradated order, with the most challenging found at the end of the book.

Greensleeves is a tune familiar to many – both as the Christmas carol, What Child is This, and as it is played in its original title. Barbra set it originally as a solo for one of her harp students. It was subsequently expanded into trio form for an Ensemble for Beginners workshop and for her harp trio at the National Cathedral School in Washington, DC.

O Shenandoah is a traditional American tune, with lyrics that describe both the Missouri and the Shenandoah Rivers – depending upon which version you choose. Harp 2 has a recurring eighth note figure that musically describes the flowing of the water. The trio was premiered by the Finale Ensemble at the 2007 Annual Concert of the Washington Area Folk Harp Society, and has also been performed by the National Cathedral School Harp Trio.

Swing Low/Steal Away Medley is an arrangement of two traditional spirituals – Swing Low, Sweet Chariot, and Steal Away to Jesus. It was premiered by the Finale Ensemble at the 2006 Annual Concert of the Washington Area Folk Harp Society, and was performed by the National Cathedral School Harp Trio in the spring of 2008.

A Medley of Carols was written for the Heatherwood Harp Ensemble’s 2005 holiday performing season. The three carols – Past Three A Clock, The Holly and the Ivy, and The Sans Day Carol – are well known carols [in England] from the English tradition. Barbra had been familiar with The Holly and the Ivy from her childhood years in Canada, but first heard and fell in love with Past Three A’Clock and The Sans Day Carol when she spent a memorable English Christmas with her relatives in Nottingham. Even today, the carols bring back wonderful memories.

A Medley for Sue was originally written as an ensemble piece for Sue Richards’ Unsemble to perform at the 2006 Annual Concert of the Washington Area Folk Harp Society. It is a medley of two traditional tunes – A Man’s a Man and The Old Foreign Hag – and was performed by the Somerset Ensemble at the 2007 Somerset Folk Harp Festival.

Solo versions of five of the trios have been recorded on Barbra’s CD – Harp-Felt – and are found in the book Selections from Harp-Felt.

Harpists Three sells for $22.00 plus P&H and MD Sales Tax when applicable.